Well, at last we’ve got our new website up and running and we’ll be able to provide more detailed updates in the future.

You don’t need to be a rocket scientist to know that sun and fish usually don’t mix. 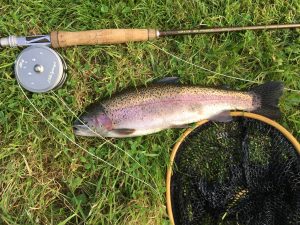 So it has been very surprising that, despite the bright weather, anglers fishing during the day, often over the hottest and brightest period, have been attracting fish!  After discussing this with visiting anglers the conclusion we’ve drawn is that the trout have been using the weed for shelter from the sun and coming out to take the angler’s flies
.  So during these circumstances, the weed has been very beneficial.   We’ve also been fortunate to maintain a good flow of water through the loch that has helped to keep the water temperature lower than would be expected with the conditions. 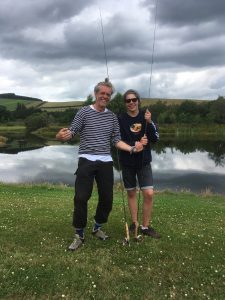 In the past week some nice 3 and 4 lbs rainbows have been tempted to take a fly, with the vast majority being released. The best rainbow was at 6lbs and this was quickly brought in and returned.
We have also had visitor recently from all over Scotland and as far a field as Germany with the river at a very low levels, we have been good water quality and great fishing.   Hajo and Fritz from Berlin joined us for the day last week to chase some Rainbows with the help of our local Fishing Guide; Simon from Tuff flyfishing.co.uk